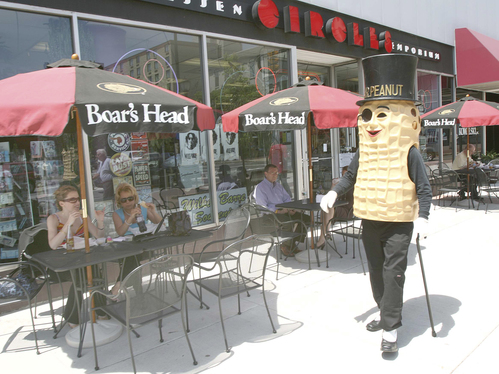 Mr. Peanut event will go on in Wilkes-Barre; celebration of Baby Nut planned

Today’s peanut-themed celebration on Wilkes-Barre’s Public Square will go on, with a focus on the birth of Baby Nut rather than the demise of Mr. Peanut.

Or perhaps it will celebrate the resurrection of the 104-year-old Mr. Peanut as Baby Nut, as depicted in a Planters Peanuts commercial that ran during Sunday night’s Super Bowl.

“We are still going ahead with the ceremony, even though Mr. Peanut as we knew him will be no more,” said Ted Wampole, executive director of Visit Luzerne County, the tourism arm of county government.

The visitors bureau announced last week it planned to hold a celebration of the life of Mr. Peanut, the monocled mascot who handed out free samples of peanuts on Public Square decades ago, when Planters Peanuts was based in Wilkes-Barre.

A Planters commercial teaser that aired last month, in which Mr. Peanut apparently fell to his death to save two friends, created a sensation on social media.

But Planters pulled the commercial after the death of basketball legend Kobe Bryant and others in a helicopter crash on Jan. 26. It was unclear when the Super Bowl began how Planters would handle Mr. Peanut’s apparent death.

It chose resurrection, with a baby peanut sprouting from a graveside plant watered by a single tear.

“We figured it would be either a vigil or a memorial,” Wampole said. “The way this played out we will celebrate the fact that the new baby peanut will carry on the tradition.”