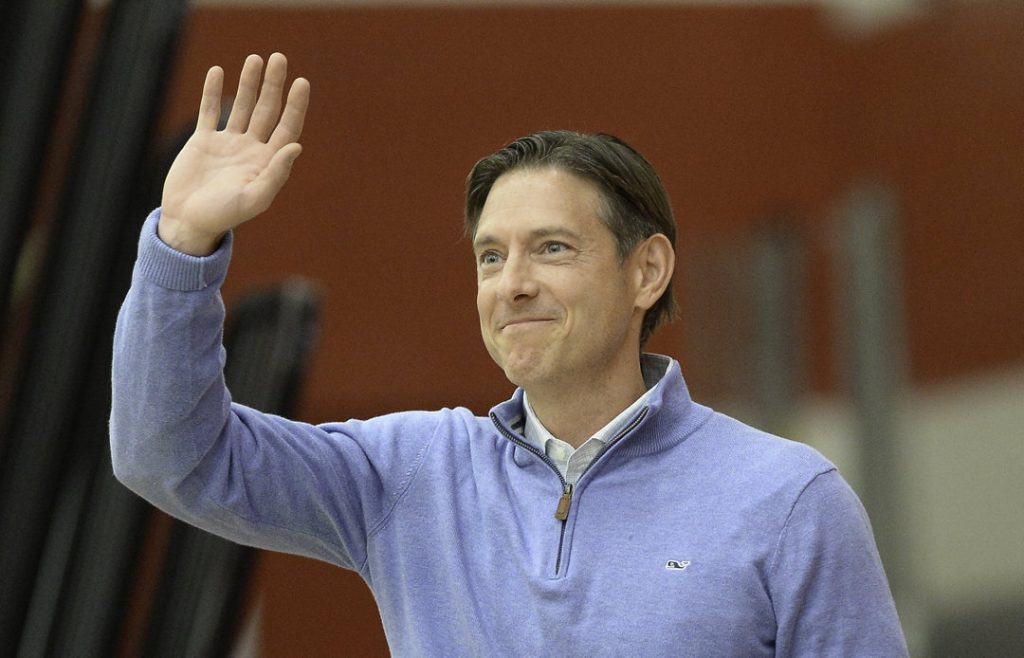 Growing up in Hazleton’s Terrace section in the 1980s, Chris Long never kicked a soccer ball or knew the difference between a yellow card and red card, let alone watch the sport on television.

His only dribbling came on a basketball court, not a soccer pitch.

“I never played the game,” the former Hazleton and Hazleton Area hoops standout laughed Monday, only a few hours after the National Women’s Soccer League board of directors approved an expansion in soccer-mad Kansas City and its ownership group: the wife and husband team of Angie and Chris Long, the very same Chris Long who led the very first Cougars boys’ basketball team to the PIAA Class 4A final in 1993 and went on to play for two seasons under the legendary Pete Carril at Princeton University before concentrating on his academics.

That, though, is where Long fell in love with both Angie in 1996 and the sport of soccer on their way to graduating from the Ivy League school with honors, marriage and successful careers in the financial sector, both individually and eventually as a team with Kansas City-based Palmer Square Capital Management, where Angie currently serves as chief investment officer and Chris as CEO. They are the proud parents of four children: Abigail, 15; Mary, 13; Christopher, 12; and Teddy, 10, each sharing their mother and father’s passion for sports.

“Angie grew up a soccer player in Kansas City … a rampant soccer fan. Upon meeting her, we really started to get into it,” Long said in a telephone interview. “Then seeing it through my daughter’s eyes just sold me, sort of like hook. line and sinker.”

It was during a trip to Paris for the Women’s World Cup in 2019 that Long first seriously considered investing in a professional soccer franchise in Kansas City, one of the country’s great soccer communities.

“The impetus for (bringing) an expansion team to Kansas City was two-fold,” he recalled. “One is the experience that my daughter and I had abroad, seeing the power of women’s soccer globally.

“Then, melding that with how the Kansas City community is such a soccer-crazed community that has been the No. 1 media market for viewing U.S. women’s national team game and the No. 1 media market for viewing NWSL games. This market also has the largest youth soccer program in the United States with 80,000 participate in … There’s a lot of opportunity for a women’s professional team to thrive here in Kansas City. … We started working toward making that happen as soon as we got back from the World Cup.”

The move to bring Kansas City into the NWSL follows the winding down of operations by the Utah Royals FC. All player rights, draft picks and certain assets formerly held by Utah Royals FC will be transferred to the Longs’ new team in Kansas City.

“Chris and I could not be more ecstatic to welcome a team back to Kansas City, especially as the league has been transformed by innovative leadership and explosive growth,” Angie Long said in a NWSL press release. “We are committed to getting this right — for our team and our town. We can’t wait for the players and the country to see what we have long known: there’s something special about living in Kansas City and something even more special about playing here.”

One member of the expansion team’s ownership group knows that experience very well.

“As a former collegiate and professional soccer player, I have a true level of appreciation for what these incredible women do on a daily basis,” she said. “I am honored to be a part of an amazing ownership group that is passionate about the game and eager to welcome a NWSL team back to Kansas City. “We have the greatest fans and community here in KC and I can’t wait to huddle around this team — we want more championship parades in the very near future!”

With the Long family leading the way.

“I’ve really grown to love the game,” Chris Long said. “It’s funny because we didn’t really have it back in the day. We didn’t have that option.”

Now, he’s all in for the sport and his new home city.

“I’m thrilled and humbled to have earned the trust of the Long family and their ownership group, and look forward to representing our city and our players in the NWSL,” said Huw Williams, who was named head coach of the Kansas City franchise.

“I’ve long admired Angie and Chris not only professionally, but as friends. They bring a drive to succeed and a commitment to providing all the tools we need to deliver for our players and their fans.”

Just like Chris Long did as a basketball player here some time ago.

“I feel incredibly blessed to have grown up in the Hazleton area,” he said. “There was always such a tight-knit community feel to it. People always cared about each other. … Kansas City is very similar … It’s a very tight-knit community, the people are very involved and they will help you any way they can. You see a lot of the same values in Kansas City that I saw in Hazleton growing up.”

Except for maybe the fascination with a soccer ball.