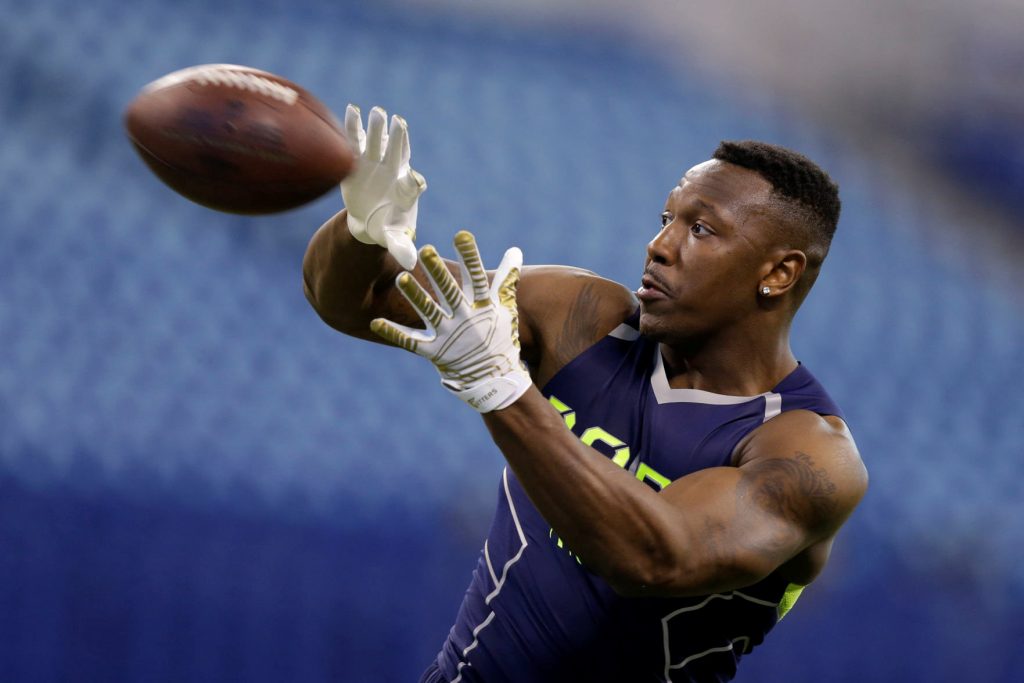 Lorenzo Taliaferro was a good football player, but those who knew him say he was a better person.

The Lackawanna College graduate who went on to set single-season records at Coastal Carolina University before a three-year NFL career, died Wednesday in his hometown of Williamsburg, Virginia.

The York-Poquoson Sheriff’s Office did not provide a cause of death for Taliaferro, 28, but WBFF-TV, a television station in Baltimore, Maryland, reported a family member said it was a heart attack.

The news was devastating to those who played with or coached Taliaferro, the single-season leader in multiple rushing categories at Coastal Carolina, and member of the Baltimore Ravens from 2014-2016.

“It was hard yesterday, but I’m taking it worse now than I was yesterday,” Indianapolis Colts guard Mark Glowinski said after Thursday’s team meetings, his voice cracking with emotion as the GAR High School graduate remembered his two-year teammate at Lackawanna. “As soon as I saw that, you know, you’re just — it was just like, you know, just figuring out who to call and stuff like that but just thinking about it now.”

The background photo on Glowinski’s Facebook page has been the same since 2012. It’s Glowinski and Taliaferro leading Lackawanna onto the field while holding the jersey of former teammate and Lackawanna Trail graduate Kyle Locker, who died in a car accident in 2011.

“We lost Kyle Locker my second year and that’s a picture I’ll always have on the background of my Facebook page,” Glowinski said. “I’ve had the same picture since I was at Lackawanna and it was me and Zo holding up Locker’s jersey for a game. When I looked at that, it hurt so much.”

One of the first calls Glowinski made was to Lackawanna College head football coach Mark Duda.

“Mark calls me from Indianapolis last night, you know, it’s a real awakening and eye-opening thing to lose somebody that young,” Duda said. “We all loved him. He was a really interesting guy. He was a work-study student for my wife, Denise. Just the most caring guy you can imagine as far as his teammates.

“He was a great athlete, but he’d help anybody at any time. Not a pretentious bone in his body and just was just a pleasure to be around.”

Attentive to not only his academics, but the people who surrounded him.

“The one quote he made to my wife was that when he went to Coastal he never dropped a class,” Duda said. “He never failed a class. His goal was to graduate from college. It was such a big thing in his life for him.

“I thought that was so cool, because you know everybody in the (NFL), a lot of guys talk about how many yards they got, or the cars they got or whatever, but that wasn’t the case with this kid. And so that was really neat. It was nice to see somebody who was humble.”

It’s a theme echoed by Joe Moglia, who was Taliaferro’s head coach at Coastal Carolina.

“Lorenzo was a good, good, good guy, a good man and football player, but he’s also incredibly humble,” Moglia said. “Incredibly, selfless. He loved others. He was quiet, unassuming and was grateful for what he did accomplish as a human being can be.”

A story shared by a Coastal Carolina grad on social media speaks to Taliaferro’s character. The day after a Thursday night game with the Ravens, Taliaferro was flying to Myrtle Beach, South Carolina, to be honored at halftime of the Parents’ Weekend game.

Socked in at an airport by weather delays, he rented a van and invited parents of some of the parents of Coastal Carolina players, in the same situation, along for the ride, which would get them to the Myrtle Beach area around 4 a.m. on game day.

“Not shocking. Not even a little,” Duda said.

At halftime, those eight parents were surprised to learn that their driver was also a school-record holder and NFL tailback, which Taliaferro never brought up.

“In our program at Coastal Carolina, we were the only program in the country that didn’t have any rules,” Moglia said. “We had one standard. And that standard was, stand on your own two feet, take responsibility for yourself, treat others with dignity, respect, and live with the consequences of your actions.

“To say somebody is a BAM guy, that would be a tremendous compliment. Within that, work as hard as you can to be the best you can be. You are a leader, and real good leaders, the focus is on the well-being of others, not themselves, and that would be Lorenzo. Everybody on his team would call him a BAM guy.”

He proved it on the field, too, rushing for a school record 1,729 rushing yards, 276 attempts and 27 rushing touchdowns in 2013, his second and final season.

“He didn’t know the system at the beginning and then he played more and more,” Moglia said. “As he became more comfortable with the system and going to spring practice in 2013, he was the guy. He had all sorts of records. I don’t think there’s an honor you could win, maybe the Heisman Trophy, that he did not win in 2013.” 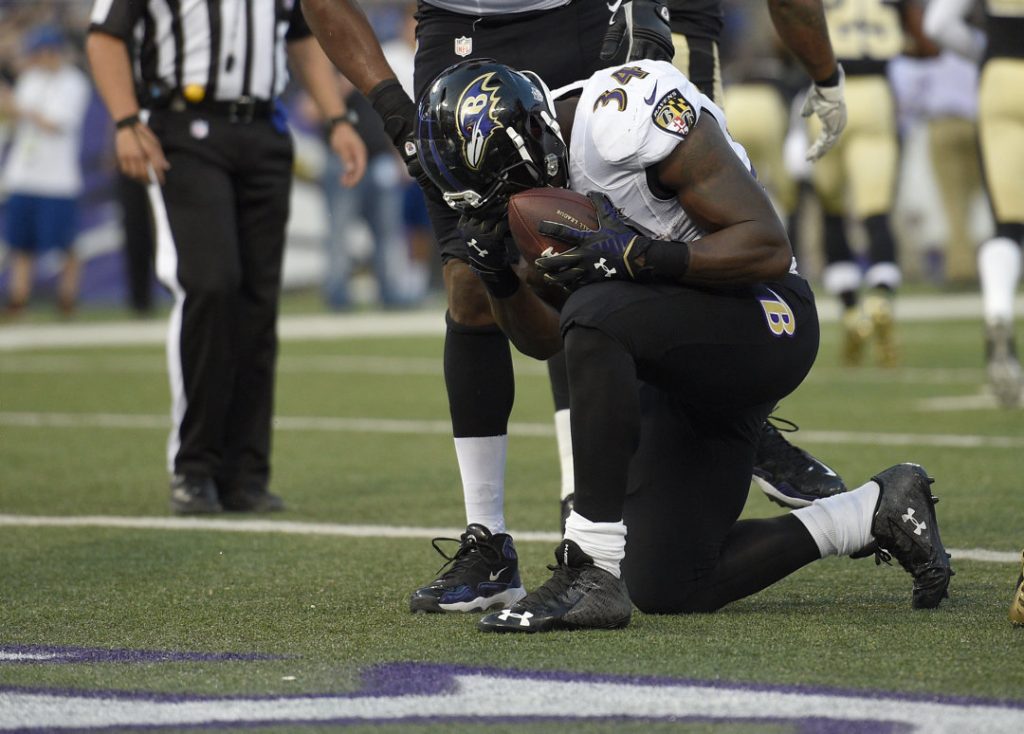 ACCESS NEPA FILE
Baltimore Ravens running back Lorenzo Taliaferro reacts after scoring against New Orleans during a preseason game in 2015.

Glowinski saw the makings of that football player, and more, in the weight room at Lackawanna and beyond.

“He had a great personality, a hard worker,” Glowinski said. “You’re able to see the beginning of his process. But you’ve got to make sure that you’re prepared in your mindsets, in the right place, just because your chance of making it out of a junior college might be lower.

“He was always working, even when we weren’t lifting in the weight room down in the basement. He had those pull-up hangers that you can put on the door frame in the hallway and he’d be doing pull-ups on there, he’d be doing push-ups and stuff like that.”

Taliaferro also tried to mentor some of his teammates.

“He was always a guy that was leading and trying to help guys that maybe came from rougher areas and stuff like that,” Glowinski said.

Their most recent conversations had to do with the injuries that prematurely ended all of his NFL seasons, and ultimately his playing career, and what the future held for Taliaferro. Whatever that was, it included regular conversations with Duda, who had been in touch with him in the past month.

“The relationships never end, ever,” Duda said. “That’s the part of it I hold onto the dearest.”

It’s helped both Duda and about 30 of Taliaferro’s former teammates who reached out to their coach since Wednesday afternoon’s news.

“Here’s the part that really got me emotionally today. A lot of our players call myself and Denise to ask how we are,” Duda said. “They’re worried how this affected us. That’s heartwarming. It means somewhere when they were in Scranton for those two years, they had a connection with people that went beyond football and scholarships and all those things. That’s really a humbling experience for us.

“‘Coach, are you okay?’ Well, no, I’m not. But at least all your players calling you, that means a lot. It’s a sad day at Lackawanna.”

One in which Duda can still find some comfort in Taliaferro’s brief and impactful life.

“Our lives were better for having him in it, for sure.”