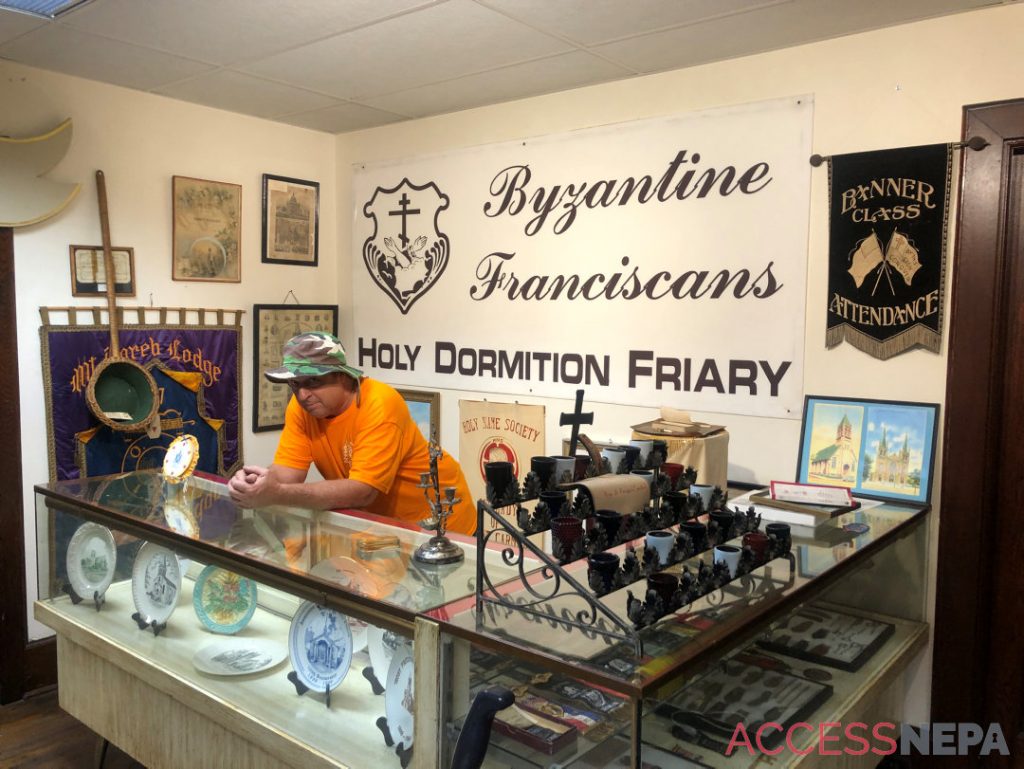 A sign from a monastery that closed this year now is enshrined in the museum of the Greater Hazleton Historical Society.

Visitors can see the sign from Holy Dormition Monastery when the museum, 55 N. Wyoming St., opens on Sunday from 10 a.m. to 3 p.m.

Tom Gabos, the society’s president, asked the Rev. Jerome Wolbert if the museum could have a sign after the monastery in Sugarloaf Twp. closed in January.

A caterer recently received approvals from township supervisors to host weddings and other events there.

Gabos started visiting the monastery as a fifth-grader when tagging along with his father, who did electrical work for the friars.

“My father introduced me to Father Basil, who said ‘don’t curse like your father,’” Gabos recalled.

The monastery opened in 1946 on a farm formerly owned by the Beck family along Route 93 in Sybertsville.

“The new institution is the monastery of the Immaculate Heart of Mary. Vast improvements will be made to the properties and land there,” according to an article from the Standard-Sentinel on April 29, 1946 that said signs had been placed at both entrances.

Gabos said one of the signs for Holy Dormition Friary, the name adopted in 1963, now hangs on a wall on the second floor of the museum, where it anchors a redesigned church exhibit.

In 1947, construction began for a chapel and house on the monastery’s grounds.

During three days in August 1949, hundreds of pilgrims arrived on buses from Scranton, Lansford, Tamaqua, Shenandoah, Mount Carmel and Mahanoy City to attend a festival for St. Francis of Assisi.

“No place in eastern Pennsylvania is as beautifully located or so well equipped with a grove for outdoor shrines and grottoes as the Franciscan Monastery at Sybertsville,” the Standard-Sentinel said then.

Thomas Trella, who has hosted events at Capriotti’s Palazzo in Banks Twp. for 21 years, has a contract to purchase the monastery, where he intends to expand his business.

With Robert Veet, his partner and brother-in-law, Trella plans to keep the pond and much of the monastery grounds intact. The partners might continue to allow farming on some of the property. Also they plan to update landscaping, remodel the chapel for weddings and the house for overnight wedding guests.

For outdoor events, they’ll install a tent but might build a pavilion later.

Their investment in the former monastery could reach $700,000.

After the monastery closed, the friars gave some holy items to other churches. Some went into storage after the friars realized the chapel would not remain a place of worship.

“We had to shift gears quickly,” Wolbert, the reverend who had been guardian of the house, said in an email. “Other items may be used by our friars in the future or find their way to a parish eventually.”

Brother Gus Paulik, 81, has moved to a home with other brothers in Wisconsin where nursing care is available.

Wolbert will stay at St. John’s Byzantine Catholic Church in Hazleton through the end of the year while waiting for his next assignment.