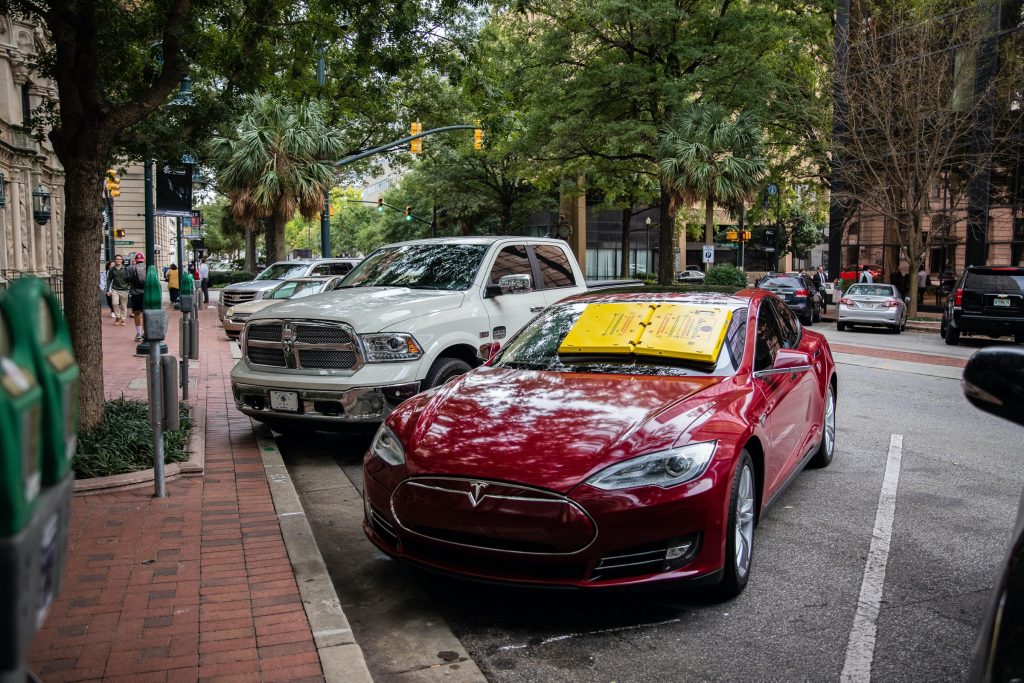 Have unpaid parking fines? The Barnacle might get you

The operators of Scranton’s parking system may crack down on scofflaws with a device that sticks to a windshield to block a driver’s visibility and only gets removed once fines are paid.

The aptly named “Barnacle” clings to a windshield with 1,000 pounds of force. Resembling a large laptop, the device opens up flat to block a driver’s view and prevent driving. Once a Barnacle is stuck on a windshield, the motorist must call to get it removed. Then, he or she is told how much is owed in unpaid parking tickets.

Once arrears are paid — and with an extra fee deducted to ensure a timely return of a Barnacle — a code is given to enter into the device to remove it. If the driver returns the device to a designated drop box in a certain amount of time, such as 24 hours, the extra fee gets refunded.

The nonprofit National Development Council, which leases the city’s street parking kiosks and parking garages, and uses a different firm, ABM Parking Services, to run the system, has been reviewing the Barnacle as a way to reduce a large backlog of unpaid parking tickets and deter scofflaws, said NDC Director David Trevisani.

“It’s something we’re evaluating,” Trevisani said, stressing that no decisions have been made.

Figures on numbers of delinquent parking tickets and total owed were not immediately available, but Trevisani said it’s a sizable amount.

NDC and ABM have not yet presented the idea to the city.

Scranton Mayor Paige Gebhardt Cognetti and City Council President Bill Gaughan said they learned about the evaluation of the Barnacle from The Times-Tribune.

Cognetti declined to comment. Gaughan said having persistent scofflaws pile up unpaid parking tickets is unfair to those who pay.

“I do think that we need to do everything that we can to hold the repeat offenders’ feet to the fire,” Gaughan said. “I’d be interested in looking at it when we’re presented with it.”

Council is scheduled to get an update Tuesday from NDC on the parking system’s operations and budget.

The Barnacle has been growing in use in the nation, said Chris D’Antuono, the COO of the Barnacle company. Allentown, Reading, Las Vegas, Nevada and Omaha, Nebraska are among cities that use Barnacles, he said.

It was developed four years ago as an alternative both to towing and to a tire-immobilization device called a boot. Drivers who find Barnacles on their windshields can clear up overdue fines in a matter of minutes and go on their way — and do so without incurring towing or storage-yard fees.

“We launched it with the idea of improving parking enforcement for cities and motorists. We wanted to invent something that was a lighter touch” than booting or towing, D’Antuono said. “It’s a way for cities to get the revenue they’re not getting from the parking scofflaws,” and it’s better for motorists than getting towed.

Trevisani said NDC and ABM looked at how Omaha, which began using the Barnacle in May 2019, implemented it.

Omaha has taken a “three strikes” approach to using a Barnacle when a parker has three citations, each past 30 days overdue, or $108 in fines owed, said Omaha’s parking and mobilization manager Ken Smith.

“It’s kind of a piece of the puzzle of parking enforcement,” Smith said. “It’s a nice option. You don’t walk out and the vehicle is gone.”