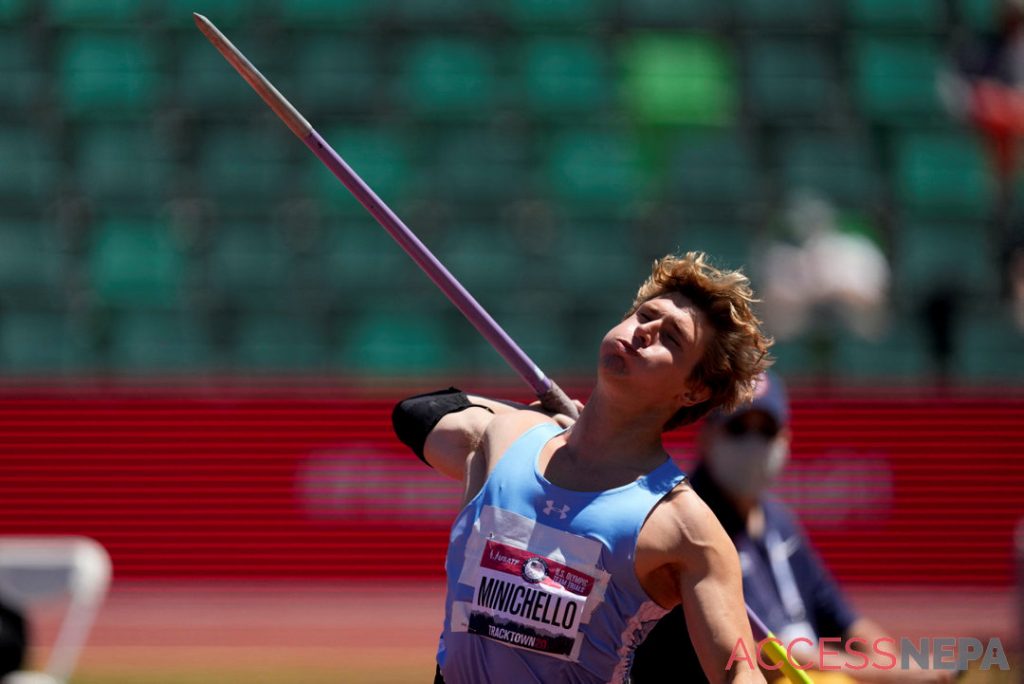 Marc Anthony Minichello finished just off the podium in the men’s javelin competition at the U.S. Olympic Track and Field Team Trials.

The former Wyoming Area thrower finished fourth with a toss of 251 feet, 9 inches in Monday’s final round after taking the lead in the qualifying round Saturday.

“Everyone’s so proud of him,” Warriors track and field coach Joe Pizano said. “It’s probably not where he would have liked. But what a successful career he’s had so far and he’s just going to keep getting better and stronger.”

Entering the finals round, the qualifying marks no longer counted and each thrower began with a clean slate. On his first throw, Minichello — who threw third — catapulted himself into the lead with a mark of 237 feet, 11 inches.

However, throws from Johnsonburg native Michael Shuey and Riley Dolezal pushed him into third. Minichello finished the first round of throws in fifth, after Curtis Thompson fired the javelin 263-7 to secure the top spot and Capers Williamson tossed 238-8 to slide into fourth.

On his second throw, the West Pittston native improved by almost four meters with his mark of

251-9 to grab second. A 260-0 throw from Shuey pushed Minichello into third to end the first round.

Minichello — along with Thompson, Shuey, Dolezal, Williamson, Denham Patricelli, Samuel Hardin and Tzuriel Pedrigo — all moved into the final round for their final three throws.

Dolezal, who fouled his third and fourth throws and sat behind Minichello, ripped a 252-10 toss on his final throw to grab third place and push Minichello into fourth. Minichello’s final throw of 239-7 solidified his finish at the Trials.

Thompson captured the title with his season-best toss of 271-7, although he fell short of the Olympic qualifying standard of 278-10. Shuey finished second with a mark of 260-0. 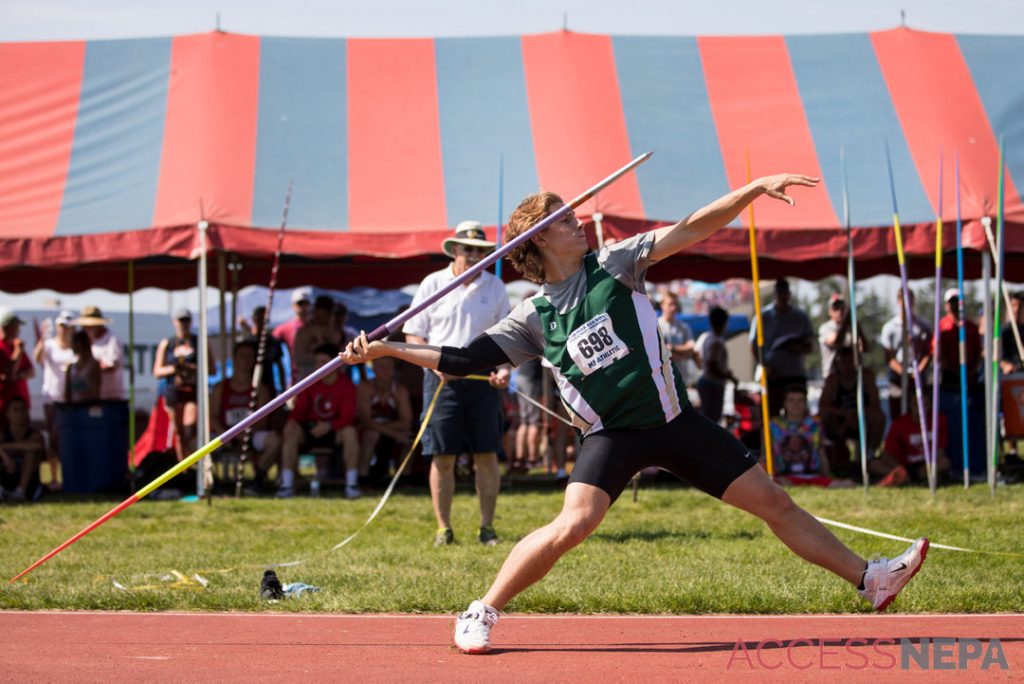 “I know (Minichello) is probably not happy because he probably wanted to win it,” Pizano said. “But at the same time, he’s a tremendous kid and he’s resilient. And he’ll end up being there one day.”

Pizano, who received supportive texts and calls from coaches and athletic directors around the Wyoming Valley Conference in the week leading up to the Trials, believes Minichello’s run will get more kids involved in track and field, as success generates involvement. Despite being removed from the program for a couple of years, Pizano said Minichello is the “poster boy” for

Warriors track and field and predicts he will make it onto the Olympic team for the next cycle.

“For what he did coming out of here and representing Wyoming Area and our track program, we couldn’t be more happy,” Pizano said. “He put us on the map.”

Minichello isn’t the only former local athlete to vie for a chance at Tokyo. Former Berwick shot putter Payden Montana is slated to compete in the women’s shot put, which begins Thursday at 4:30 p.m.

If Montana, who throws for the University of Oklahoma and qualified with her toss of just 57-¼, makes it into the final, she will throw again at 11 that night. Whoever meets the threshold of 60-8½ punches their ticket to Tokyo.