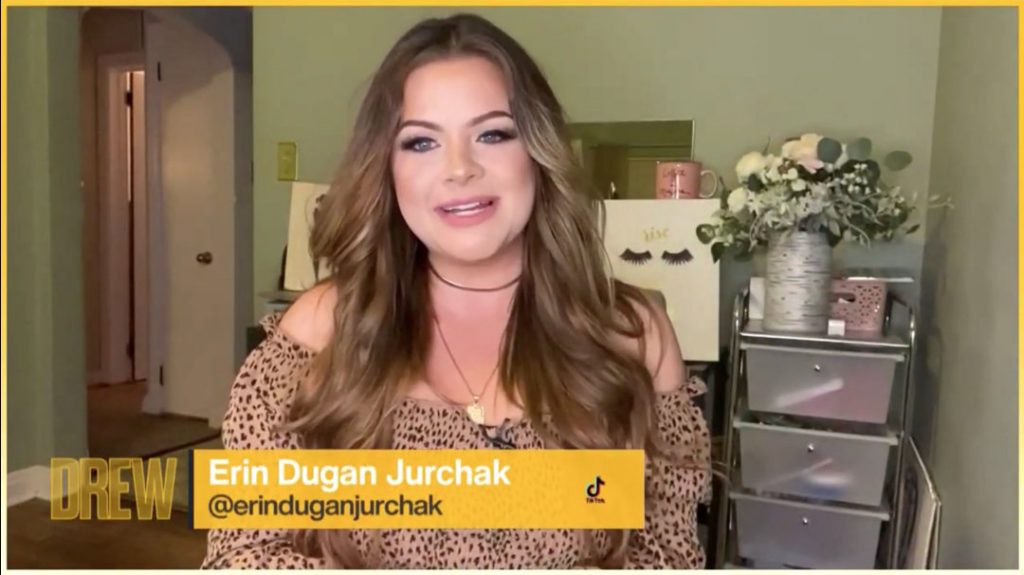 Former local news reporter and anchor Erin Dugan Jurchak, who has become an internet sensation by giving makeup and beauty advice in recent months, appeared on the “Drew Barrymore Show” on NBC on Tuesday afternoon to talk about a current trend.

Barrymore introduced Jurchak to her national audience by saying she was “someone who really knows what she’s talking about.”

Jurchak, who has become popular on the internet app Tik Tok during the pandemic, appeared on the “Hot Tip” segment of the show. She spoke about a Tik Tok beauty trend called “slugging,” which entails rubbing Vaseline on your face before sleep to lock in moisture.

“This is what I have been doing lately and loving it,” Jurchak said in the submitted video clip.

She said she rubs a small amount under her eyes, on her laugh lines and on her forehead each night.

Barrymore, an accomplished actress who launched the show in September, said she planned to give it a try.

“I can’t wait to incorporate that tip into my routine —beautiful and brilliant,” Barrymore said.

Jurchak, 34, a Nanticoke native who now lives in Exeter, has amassed more than 376,800 followers and millions of video views on Tik Tok during the pandemic. One video on Oct. 31 about hair extensions was viewed more than 2.6 million times and got more than 246,300 likes.

“It was incredible being exposed to a national audience, that was a first for me,” Jurchak said. “The producers initially reached out for me to do a segment on Halloween makeup, but it got cut for time. So I was very excited they reached back out to be a part of Beauty Week on the show.”

Jurchak’s Tik Tok profile describes her as a “washed up TV reporter” and “beauty product obsessed.”

Jurchak previously worked as weekend sports anchor for WBRE-TV and then as a reporter for FOX 56.