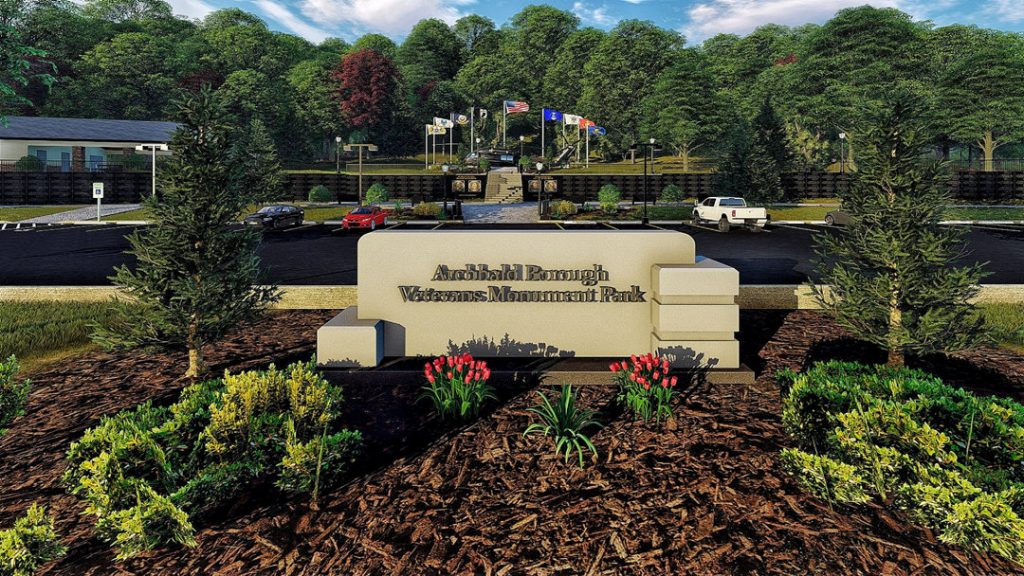 What began as an unassuming plot of land off Kennedy Drive in Archbald will soon become a sprawling monument dedicated to the men and women of our nation’s armed forces.

The park was the idea of Archbald Borough Manager Robert J. Turlip. In June of 2016, he founded the Archbald Borough Veterans Monument Park Committee and serves as president. He formed his committee alongside area veterans and members of the borough’s American Legion and VFW Posts. The group operates with 35 core members and a network of about 75 volunteers.

“I have some great volunteers. A lot of them are veterans. There’s also a lot of community members, who maybe had a parent that served in the military,” said Turlip.

The 2-acre parcel of land that the park will be built on was donated last June by Lockheed Martin, a security and aerospace company. Before the committee had secured the parcel, it was originally intended for a police station. According to Lockheed Martin’s official website, the company has employed 22,042 veterans and has given nearly $9,330,000 to veteran’s programs as of 2018.

Construction began last month, where crews began cutting down trees and clearing the land. Initially, the committee wanted to start the project earlier in the year, but they were subject to issues related to surveying the land and coronavirus-related slowdowns.

Originally, the project was a bit smaller in scope.

“We were looking at trying to bring a helicopter in. The project just got bigger and bigger. With the parcel that we found, we decided to go with the bigger project. Then, we started raising money and we started to apply for grants,” said Turlip.

The committee put a lot of effort into fundraising, with Gun Bingo and Purse Bingo events are two of their most popular. The committee has raised around $130,000 for the park. They’ve also received a $300,000 LSA Grant, as well as a $10,000 grant from Lackawanna County’s Reinvest Program to be used on the park’s pavilion. All together, the project will cost an estimated $1.1 million.

The committee hopes to secure the funding for the rest of the project through further grants, fundraising and donations. A significant amount of money will come from the sale of memorial tiles.

Those tiles, made of jet-black granite, will be the park’s largest and most notable features. More than 1,600 veterans will be memorialized on the six-foot high, 400-foot wide structure. Each tile will feature a veteran’s name, branch and era of service. Some optional features include adding a photograph or a military emblem. Turlip hopes to raise at least $180,000 from the sale of the tiles, which will be made by Monuments by Parise in Blakely.

“I’m so proud and honored to be a part of this amazing project. It will be a one-of-a-kind, unique and special tribute to veterans for generations to see in the future. It is nice to see such a wonderful tribute to veterans on such a large scale in our area,” said Memorial Specialist Jeff Parise.

“Once we sell the tiles, January will be the time to start our search. It just depends what’s out there and these things get decommissioned at different times,” said Turlip.

As a retired U.S. Army Major, the project was personal to Turlip. After spending 22 years in active duty, he went into the National Guard and spent his last two years in the reserves. Several of his family members have served or are serving now.

“I served, I have two brothers that served, one in Iraq, one in Afghanistan,” he said. “I have a son currently on active duty right now. He’s a lieutenant at Fort Lewis in Washington. His wife is a lieutenant. My grandfather served in WWII. I had an uncle who served in WWII and was a POW. Serving means a lot to me and my family.”