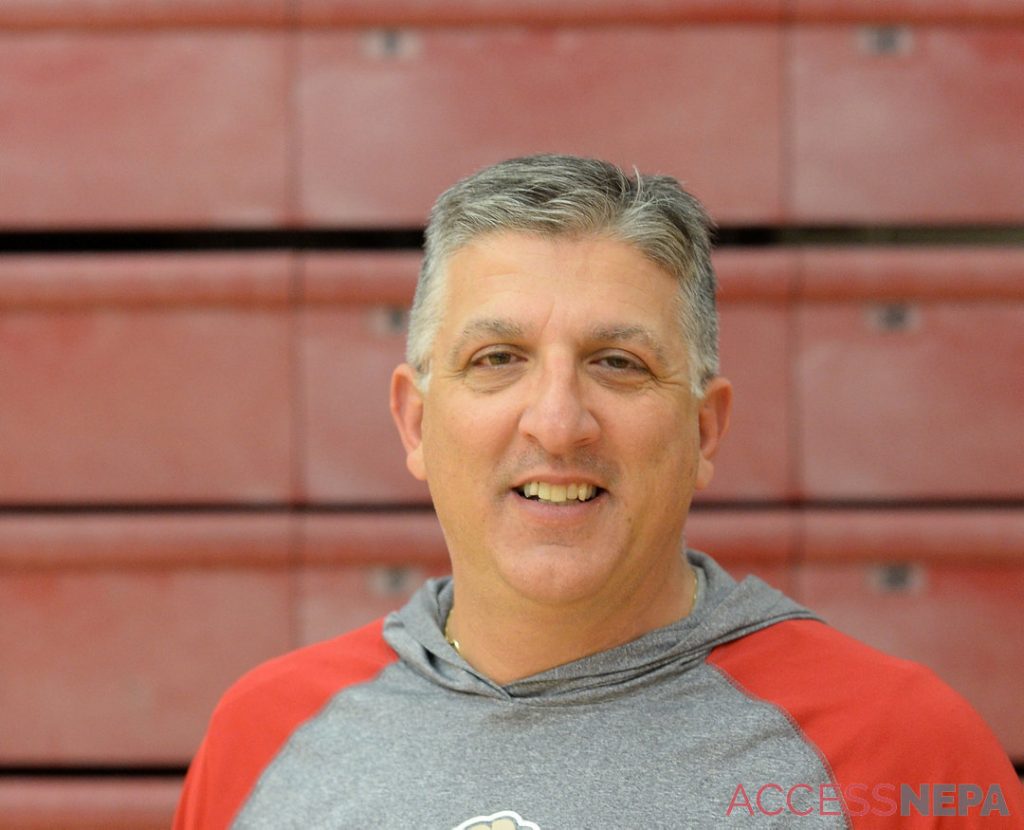 Joseph honored for work with Coaches vs. Cancer

Now, Joseph’s dedication to beating another opponent – cancer – resulted in him being honored by the American Cancer Society Coaches vs Cancer of NEPA for raising more than $40,000 for the program during his coaching tenure at Hazleton Area.

Joseph was the featured honoree during the Coaches vs Cancer of NEPA virtual kickoff celebration, which aired live on Facebook on Sunday. The event was co-hosted by Marty Myers of the Scranton Times-Tribune sports department and Scranton Prep boys’ basketball coach Andrew Kettel.

“I’m truly humbled and honored for the recognition by Coaches vs. Cancer of Northeastern Pennsylvania, an organization that was started and spearheaded by Coach Kettel,” Joseph said. “I’ve been blessed to be a part of the committee for over 10 years during my tenure as the basketball coach at Hazleton Area High School.”

Myers introduced a videotaped speech of Joseph by highlighting his illustrious playing and coaching careers. Joseph was a Second Team All-State selection in Class 4A during his playing time at Hazleton High School and went on to score more than 1,500 points at Bucknell University and finish as the school’s leader in assists, free throw percentage and three-point shooting percentage.

In addition to coaching at Hazleton Area, Joseph spent two years as the head coach at Silverado High School in Las Vegas, Nevada. During his time at the helm of the Cougars, he led the team to nine Wyoming Valley Conference championships and five District 2 titles. He took his teams to the PIAA Sweet 16 three times and reached the state final four once. He finished with 273 career wins and a .774 winning percentage.

During his speech, Joseph reflected on what he’s learned from the game of basketball and how it shaped his life and helped him learn how to deal with adversity.

“I’m very blessed the game of basketball has given me an incredible life, from the places I’ve had the opportunity to travel to as a college player, to the interaction I was able to have with some great coaches and mentors that have meant the world to me throughout my life,” he said. “There are things that have happened throughout my life, throughout the game of basketball, that I draw from every single day and the lessons that I’ve learned, the adversity that I’ve faced, the success that I had are things that I never take for granted.

“And to be honored this year in 2021 with the extraordinary situation and hand that we’ve been dealt as a society is something that is very humbling to me.” 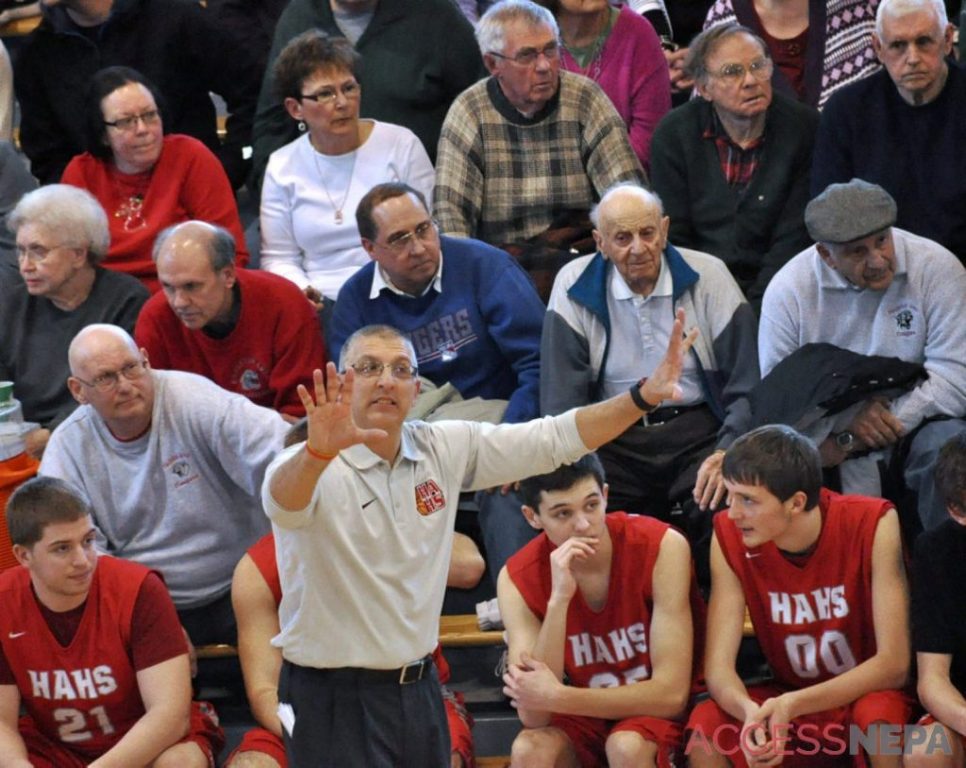 Joseph went on to thank former Hazleton High and Hazleton Area head coach Bruce Leib for helping him transition from a player to a coach, which led to him getting involved in the Coaches vs Cancer program.

“I was very fortunate with Coach Leib taking me under his wing. I had an 11-year apprenticeship (coaching under him) first from 1990-1997 and then when I came back from Las Vegas from 2002-2006. I got 11 years with arguably as good a coach as we had in Northeastern Pennsylvania or throughout the entire state. He taught me exactly what you needed to be able to do to run a program the right way,” Joseph said.

“When I had the opportunity to run the program at Hazleton Area High School, I took those lessons I learned from him and I wanted to make sure that I never allowed the standard of play at Hazleton Area High School and our program to dip below what was expected of us. And really from the start one of the first things that I did was want to become part of Coaches vs Cancer.”

The Coaches vs. Cancer program is a nationwide collaboration between the American Cancer Society and the National Association of Basketball Coaches. Norm Stewart, former head coach of the University of Missouri’s men’s basketball program, cancer survivor, and member of the National Association of Basketball Coaches, provided the vision and inspiration for the Coaches vs Cancer concept.

He started the program by challenging fans to pledge a dollar amount for every three-point shot made by his team during the season. The concept evolved into a nationwide effort uniting coaches, fans, players, and communities across the country to fight cancer. Since the program began more than 25 years ago, high school and college programs across the country have raised more than $3 million.

Coaches vs Cancer has also largely been looked at as a way to honor the life of Jim Valvano, who was at the helm when the North Carolina State University men’s basketball team won the 1983 NCAA championship and also coached at Bucknell from 1972-1975. Valvano delivered a memorable speech at ESPN’s 1993 ESPY Awards ceremony that came just two months before he passed away from cancer.

During his speech on Sunday, Joseph reflected on Valvano and their shared mission to fight cancer, as well as how the humble beginnings of Hazleton Area’s Coaches vs. Cancer fundraising laid the foundation for its future. He recalled that the team raised $181 its first year by collecting donations before a scrimmage with Holy Redeemer and how that escalated to years where they raised $6,000 for the program.

“I was very, very proud of the fact that Hazleton Area High School, our school community, and the entire community itself, helped us to raise over $40,000 during my time as coach. I think we distinguished ourselves throughout the lower part of District 2 in the Wyoming Valley Conference as the team, as the school, as the community that was really willing to put forth the effort, provide some funds to really try to combat this horrific disease that, 20-plus years later after Coach Valvano started this mission, we’re still trying to fight today.”

Despite receiving the individual award, Joseph made a point during his speech to showcase how Hazleton Area’s fundraising was a team effort.

“My players bought into it 100 percent. The students in our school, the teachers, the administrators bought into it. Everybody was wearing t-shirts to games and to school. I was always so proud of the banners we raised inside our gymnasium. We had some great opponents during those (Coaches vs Cancer game) nights. We always tried to have a game against a rival or one of the biggest games of the season and my players always really stepped up and made it happen.”

The fight against cancer is personal in more than one way for Joseph. His oldest brother, George, beat Stage 4 cancer in 1993 after a long battle and several months of treatment and celebrated his 60th birthday last September.

Joseph, himself, is a two-time cancer survivor. He had an operation and radiation in 2004 after doctor’s discovered cancer during a routine checkup for another issue. Two months after he was named Hazleton Area’s head coach in May of 2006, doctor’s discovered the cancer had returned but it was caught early enough and Joseph didn’t have to endure any treatments other than another operation.

However, his beloved mother, Cora, lost her brief battle with small cell lung cancer on Jan. 22, just one day after her 84th birthday. Cora’s husband of 61 years, George, and their sons Mike, George, James and Timothy were able to be with her during her final month.

Despite the pain of losing his mother, Joseph expressed gratitude for his own life during his speech and expressed a desire to remain an active volunteer with Coaches vs Cancer even though he’s no longer coaching.

“Thank God, it’s 15 years this year that I’m cancer free and have been able to continue on in my life raising my family with my wife, Jennifer, and my kids Angeline and Jonathan. It’s something that I’m very, very thankful for and I never take any single day for granted,” he said.

“This is something that’s going to continue to drive me even though I’m not the coach at Hazleton Area High School anymore. I still want to be actively involved in Coaches vs Cancer helping the American Cancer Society as much as I can. I can’t tell you how humbled I am for you guys to recognize me and our community for what we’ve tried to do with Coaches vs Cancer over all these years.” 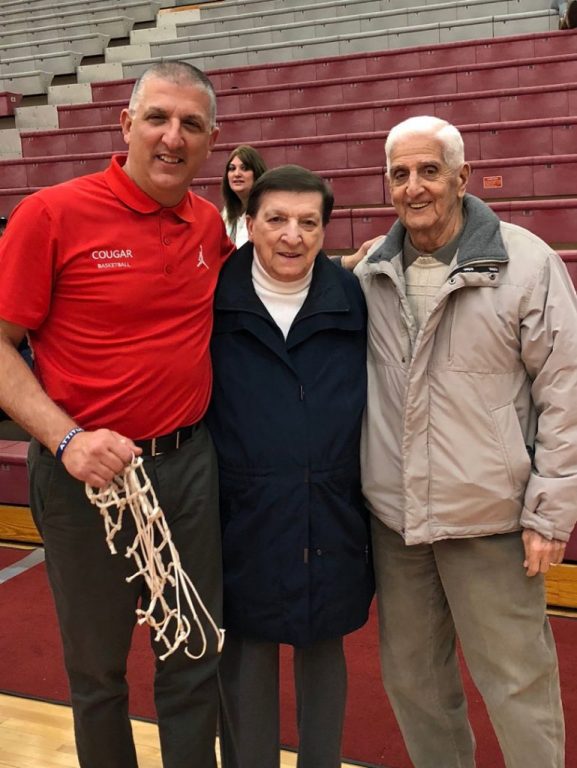 SUBMITTED PHOTO
Former Hazleton Area boys’ basketball head coach Mike Joseph is pictured with his parents, George and the late Cora Joseph, after the Cougars won the Wyoming Valley Conference Division I championship in 2018. Mike was honored for his work with Coaches vs Cancer, helping to raise more than $40,000 for the American Cancer Society during his time as Cougars’ head coach.

Joseph concluded his speech thanking Kettel, among others, for the awareness he’s brought across Northeast PA to the Coaches vs Cancer program.

“We have a great leader in Coach Kettel. He has taken our committee, our little neck of the woods here in Northeastern Pennsylvania, and he’s put us on the national stage and he’s been honored for that and he’s very deserving of that. I want to thank you, (American Cancer Society employee) Jamie (Kane), for everything you do for the organization, and all the coaches, teams, and players throughout Northeastern Pennsylvania,” Joseph said.

“I know this is a crazy year. I know we have a lot of other things that we’re worried and concerned about but, if we can continue this fight and hopefully someday bring about an end to this thing, that’s the goal; where we don’t have to raise money anymore because cancer doesn’t exist anymore. So thank you very much. I’m honored and humbled.”

Following Joseph’s speech, Kettel shared his own remarks and appreciation for the work Joseph has done over the past 15 years.

“I can’t begin to tell you how much I appreciate all of your support over the years with Coaches vs Cancer and really leading the Wyoming Valley Conference to get involved and leading the other coaches and officials and, of course, leading your program at Hazleton,” Kettel said.

For more information how you can help Coach vs Cancer of NEPA, visit coaches.acsevents.org/NEPA.