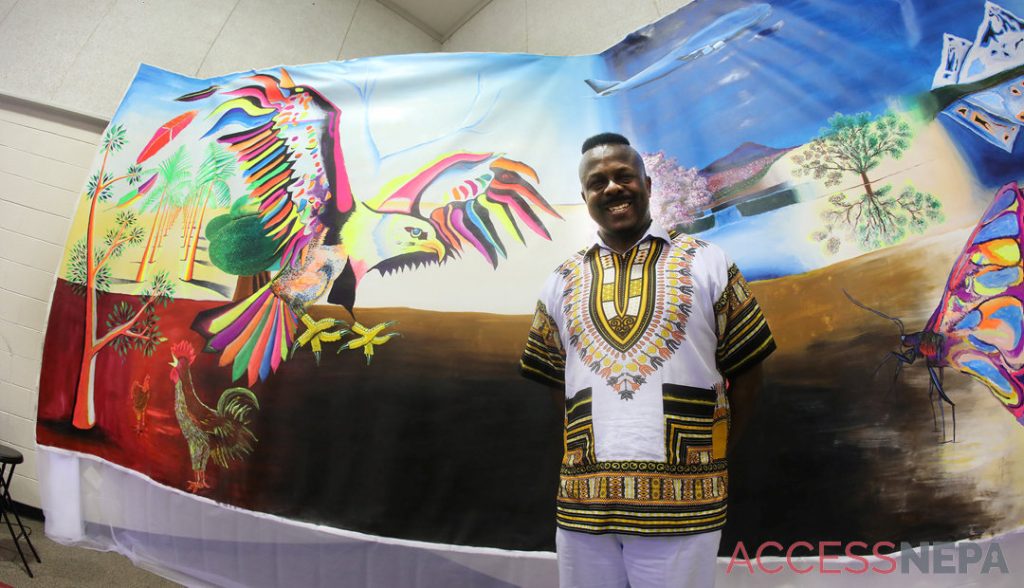 One of world’s largest paintings to be unveiled

It took two years and quite a few cans of paint to create one of the world’s largest paintings.

And when the 100-by-12 foot piece is unveiled Friday and Saturday from NC Church in Berwick, there will be musical storytelling, worship, dancing and more.

“It was a very fulfilling experience for me,” artist Ibiyinka Alao said. “The whole process of making it — from getting the canvas of that size, many gallons of acrylic paint and help from people during installation, transportation to even setting up this exhibit has been wonderful. People are really nice. That is the good thing about the world we live in — people.”

Alao, who was named Nigeria’s “Ambassador of Art” in 2005, titled his painting “Eternity.” He explained that it is multidimensional.

“However, I will say that one of the strongest ideas surrounding the making of it is finding the true meaning of ‘love’,” he said.

One of the stories depicted in the painting is of a young Alao catching fireflies in a jar.

“In the end my father told me that I had to let them go, so that they could become stars of the night sky. When you love something as much as I love those fireflies, the best thing is to let them go,” Alao said. “This simple thing my father told me, has become a powerful testament to what true love is in my life. When we love someone, we set them free.”

In fact, Alao published a book, “Ibi’s Fireflies,” based on the memory. It won the grand prize of the Scholastic Children’s book competition in the United States.

Kristen Ann Jordan, an independent curator who helped with Alao’s exhibitions at the National Museum of Nigeria, British Council, Smithsonian Museum of African Art, Metropolitan Museum of Art and Empire State Building, is helping to promote the Berwick event.

“The painting has been certified by the keepers of world records to be one of the largest, if not the largest acrylic painting in the world to be made on a single stretch of canvas,” she noted.

The title of the two-day event is “Hope for such a time as this.”

“It was born out of a desire to help people have a hopeful outlook after all the darkness brought by the COVID-19 pandemic, riots, hurricane and many more disasters the world has witnessed in 2020,” Jordan explained.

The painting will be revealed as a musical is performed. 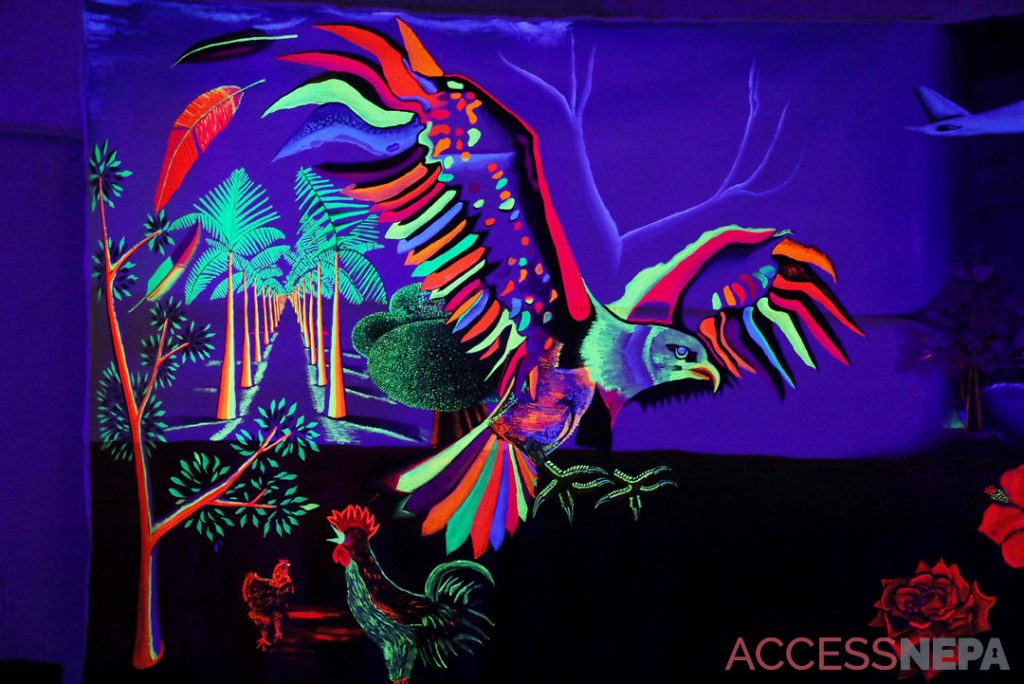 WARREN RUDA / STAFF PHOTOGRAPHER
A portion of artist Ibiyinka Alao’s painting titled “Eternity” that will be unveiled today and Saturday in Berwick is shown.

“It is derived from an unusual kind of storytelling style in West Africa called ‘Dance-Drama’,” she said. All of the performers are local, and include theater enthusiasts from Berwick, Bloomsburg and Hazleton.

Alao, who lives near Hazleton, frequently visits local schools to speak to students about art, Africa, peace and character building through art. He worked on the painting in Hazleton and at the WagonWorks Studio in Tamaqua.

NC Church donated use of its space.

Alao said he’s looking forward to others seeing his painting and hopes they’ll find meaning in its interpretation.

“That eternity itself is only achievable when we let go of the present life, and transfigure into something glorious. Love in its pure form has no succession of events because it is a part of eternity, and I have been living in eternity since I knew the love of family, friends and God,” he said.

The event will be held Friday and Saturday from 5 to 8 p.m. both days at the 20 Kachinka Hollow Road church.